In addition, Activision has partnered with Vybe Squad, LLC to develop a True Crime: Streets of L.A. double CD soundtrack that will showcase many of the original songs from the game. The soundtrack is scheduled for release this fall and will be distributed by Universal (UMVD).

“Vybe Squad is thrilled to have partnered with Activision to release what is sure to be one of the most extraordinary and innovative collections of hip-hop music,” added Bright Riley, CEO, Vybe Squad. “This album marks the first time that the entire west coast is joining forces to create some of the hottest flows L.A. has to offer.”

In True Crime: Streets of L.A., players assume the role of rogue Elite Operations Division operative Nick Kang, a badass ex-cop, whose brutal reputation and lethal skills have landed him the nasty task of taking down the Chinese Triad and Russian Mafia cartel that has turned the City of Angels into a war zone. Take part in explosive gun battles with double fisted firepower, devastating martial arts brawls, and high-speed shootouts across 240 square miles of accurately recreated L.A. In car or on-foot, the unique branching missions include locating hostile witnesses, infiltrating criminal-invested locations, taking out evasive informants and busting the heavily armed and deadly bad guys.

True Crime: Streets of L.A. will be available this November for the PlayStation®2 computer entertainment system, the Xbox video game system from Microsoft and the Nintendo GameCubeTM and has been received a 16+ PEGI age rating. 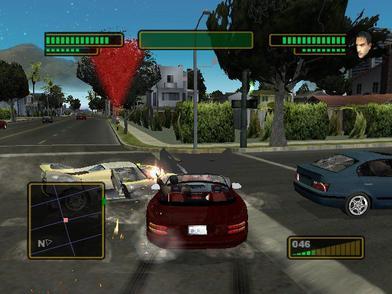